From Ibiza to Spanish mainland (96.5km) on a SUP

Our friend and top international paddleboarder Kiwi Annabel Anderson was dearly missed in Podersdorf, but after reading this story, no one will blame her. She added another first to her ever expanding portfolio of achievements in recent months by paddling the longest distance in a 24 hour period while crossing from the Baleric island of Ibiza to Spain on Friday together with Fred Bonnef (France) and Belar Diaz (Spain).

“I was in La Torche, France at the Stand Up World Tour surf event where Belar and Fred mentioned they were going to attempt to cross from Ibiza to Spain later in the week and that there was a spare place due to someone dropping out.  I rearranged a couple of things and drove across France to Barcelona on Tuesday.  I had no board in Spain and that may go some way to explaining how incredible it was to pull this attempt together, let along start and complete it” she told Petra (who was stuck on A1 in a 4 hour highway closure due to burning truck) from Denia, Spain, on Saturday.

“When I heard about it, I thought it would be a good mission and great training for some ocean crossings I have lined up for later in the year. Challenges like this are as much about logistics planning, project management and mental stamina as they are physical prowess.  I was certainly calling on the countless hours I spent on the water over the NZ summer in the late afternoon when the thermal land breeze was kicking in (head wind) and the two guys I was paddling with were fading.  It was as much about motivating and keeping everyone on track as it was about finishing.  Sighting the lights on the beach of Javea was a welcome sight and the support crew on the catamaran were phenomenal in keeping us on course, refuelled and safe.”

To think that 4 days ago this was merely an idea being thrown around in a car park at a surf beach on the Brittany coast to starting and completing it is incredibly satisfying.  The range of emotions you go through when you do something this like are far and wide.  Even though I was out on the water for close to 15 hours yesterday, I was still able to surf into the beach and carry a 14ft board up the sand. There’s swell forecast tomorrow, so there’s no guessing what I’ll be doing.  Paddleboarding is incredible for conditioning your body and how my body has held up after yesterday is testament to that.”

Here is an Interview with Belar Diaz, who had the idea for the crossing and organized the logistics:
The crossing was your idea, Belar?
Yes, last year I started to think about a nice crossing, something nobody had attempted, I thought the Ibiza-Spain thing was a novelty. I started looking at some charts and I thought it was probably too much for a day, but I kept pushing the day that helped me with the planning to see if we can do it in one day. Long story short,  we tried it, and it worked out.
Did you have any help?
Yes a friend of mine runs a charter company and they lent us a 38 Catamaran which we could use for the journey, they actually gave it to us for free
How were the conditions?
The conditions were great, could not have been better, in the beginning we were doing  a nice downwinder with 15-20 km per hour, the Catamaran could barely keep up with us. That was for about 6 hours. Then the wind stopped and for the last part of the trip we actually had headwind. We were so exhausted at the time.
Did you consider giving up?
I always thought we would be getting there. There were times when I was falling a lot, it was a bit frustrating as my board was more of a downwind board but something inside of me kept telling me we would make it, even with the last 1.5 hours at night where it was dark, that was hard.
Here is the full interview as video:
;
And more from Annabel right after the crossing:
Congratulations on the crossing, Annabel! How was it? How do you feel?
Thanks! I think it is only now just starting to sink in what we achieved by paddling from Ibiza to Spain.  When I heard about it, I don’t think I fully thought through what it would be like to be out on the water for the best part of 15 hours. Strangely, I felt fine when I finished and even managed to surf into the beach in the dark and carry a 14’8 board up the beach. My body has recovered well and I was back out surfing on Sunday morning. SUP must be good for you! I think the hardest big was getting to the start – pulling off a mission like this is no easy task.  Paddling was the easy bit!
Would u do it again? What would you do different?
I am always up for adventures and I try to make myself open and able to take opportunities like this when they come up. If a similar challenge comes up, who knows! A lot depends on being in the right place at the right time. If I were to do it again, I would not change a lot.  I have done a fair amount of long distance endurance sport and know some of the basic ‘do’s’ and ‘don’t’s to avoid making easy mistakes.
What equipment did u use?
Board:
I used a Starboard Point 14’8″.  It’s no longer in the range and is several years old, but it stood up to the challenge and performed well against new 2012 boards which says a lot for the brand.
Paddle:
I used a ZRE Power Surge with 7.5″ blade. I paddled it for the first time, but had no blisters.
Hydration:
Starboard hydration pack
Clothing:
Sweet compression water tights
Sweet rash tank
Starboard longsleeved rash top
Starboard cap
Thanks Annabel, and we are looking forward to your next adventure!
We will keep you posted on Annabel’s upcoming adventures, she has just cleared out her London flat and will be travlling the globe for the rest of the year across Europe, North America, Asia & Australasia, such is the growth of stand up paddling worldwide before touching back down in NZ at the start of next year for the summer.

“In the past two weeks I have been in 3 continents and 7 countries, it’s hectic, but exciting. It’s the ultimate endless summer. It’s such a mindblowing thing to be a part of right now and the opportunities I am getting to go to beautiful places is incredible.“ 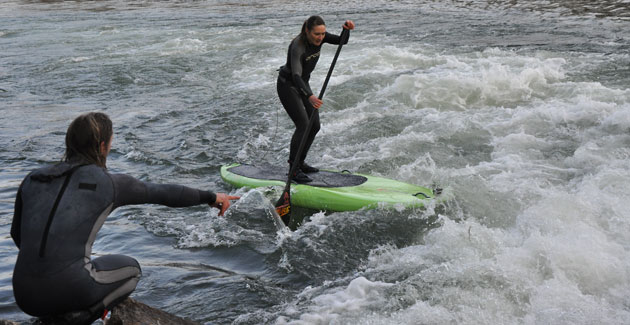 Annabel Anderson getting ready for extreme challenges by surfing a river wave on Isar in Munich, Bavaria in November (5°C water temperature)

Congratulations Annabel, for showing once more what a girl on a SUP can achieve. Wonder how she got so incredibly fit? Check out these videos where she shares her best exercises!

The will be no SUP World Cup Hamburg 2011