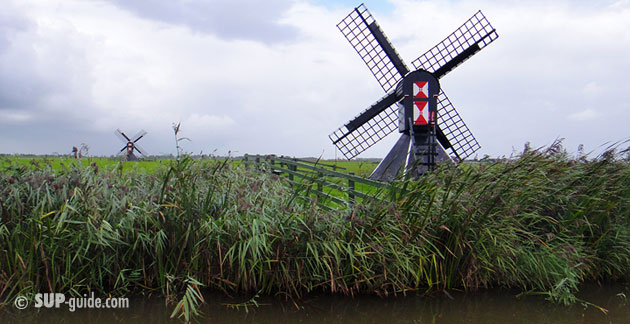 The SUP 11-city Tour over a total distance of 220km is one of the longest and most demanding SUP Races. It took place this year from Sept 7-11 in 5 stages in 5 days. It is a journey, an ultimate challenge through 11 authentic villages of Friesland (the northern province of the Netherlands). The tour is along the original waterways where ice skaters created this historical tour 101 years ago.

Each day the athletes paddle about 40-45km, following the historical tour and collecting a stamp in every village, to then arrive back in Leeuwarden, where everything started.

But it’s not only the distance that is demanding, it’s also the Dutch weather conditions in September. This year the weather conditions were especially heavy with wind forecasts up to 7bft plus heavy rain. Freezing it was in Friesland…

Over 30 athletes had traveled to Holland from Italy, Australia and Spain/Germany, France etc. and met in Leeuwarden Tuesday night in heavy wind and rain, each with their own hilarious story to tell on how to get to Holland with a 14’ board, which involved flying, endless drives, fitting a 14’ board into a Dutch train (hello Fabrizio and Leo!) and a board blown from the roof in strong wind (hello, Petra!).

The rain and wind had not stopped over night, so that was a heavy first day with paddling against a constant headwind of 5-5.5 bft. Not a single km of downwind. But some nice scenery to appreciate when the sun came out for a few minutes, green, green grass, dark blue sky and beautiful windmills and ships were passed. But that pleasure lasted only briefly – it started to rain heavily again and after 40km of paddling came a 4km lake crossing with even stronger wind and 1-2ft waves. Fun, fun. Bart de Zwart came in first after 5:28:59, with Ryan James (both on Starboard) only 3 seconds behind. Fanatic Team Rider Paul Jackson from Australia came in 3rd.  The new Fanatic 14’ flatwater board was incredibly fast against the wind and on the flatwater, but very hard to handle on the extremely choppy lake, that’s where especially Fabrizio Gasbaroo had lost quite a bit of time. For the ladies local Anne-Marie Reichman (Starboard) came in first, followed by Angela van Hoof-Jackson came and Simone Horsfield (both on Fanatic 14′ Flatwater). Everybody was happy to have survived that day. Belar Diaz said: “We have done the hardest part. It will be much easier from now on”. Well, that turned out to be not quite true….

The wind was still blowing with 5.5bft and the day started with crossing that terrible lake from the day before again. Well you would assume the second crossing would be with downwind as a reward, but the route was into a different direction which meant strong sidewind and after that lake there were 2 more, even bigger lakes with head- and sidewind to cross. Everybody thought the hard part was over after the lakes were crossed, but then came a river, which had to be paddled upstream, against 5.5bft wind and 1ft waves. To make things worse, the lunch post, where the riders had 15mins everyday to eat, change into dry clothes and re-fill the camel backs, came incredibly late that day, after way more than half. After lunch, the paddling got easier, “only” headwind, but no more mean chop to deal with. But the scenery also got very boring, just grass, grass, grass and sheep, sheep cow for 15km. Again, Bart de Zwart came in first after 5:46, followed by Ryan James, Caspar Steinfath, Paul Jackson, Leo Nika, Belar Diaz, Moritz Martin and Fabrizio Gasbarro, For the ladies, Angela  Van Hoof-Jackson came in 1st, Anne-Marie Reichman 2nd, Simone Horsfield 3rd . After 90km so far, only about 8km had been with downwind . Several participants had to end the race before the finish because of the heavy weather conditions, so everybody who had survived another crazy day  went to bed tired and happy straight after massage and dinner.

Workum to Franeker with Stamp Collection in Bolsward and Harlingen, 44km

On the 3rd day, the wind finally blew a little less, but in return the scenery got incredibly boring. Only grass, grass, grass, sheep, sheep, cow for about 25km. 2 small villages with a few houses and ships. After the action-packed days from before, where you were in a constant adrenaline rush to keep moving and survive the day, this day seemed to drag on forever. Only highlight were the 10 km on the canal from Harlingen to Franeker, where there were some big ships and with a bit of luck you were able to catch there waves. I had paddled the full 10 km in surf-stance chasing waves, which had resulted in 9 blisters on the left hand due to the different paddle grip. Well, nothing a stolen pin from the leader board and a bit of tape could not fix. Due to a bit less wind, the first athletes finished in slightly under 5 hours that day.

Day 4: Dead fish creek  and weed on the fin day

The weather had improved, again only moderate wind and even some sunshine with only a few showers. The paddle was relatively easy, but with 45km very long and the scenery again quite boring for the first 25km, just reed, reed reed, sheep, sheep, cow. There was an especially depressing passage of 10km in a small, rotten creek with tons of dead fish and lots of weed that got stuck in the fin. There was just reed on the side, no place to quickly stop and get rid of the weed, so quite a few paddlers performed a strange dance on the board trying to get rid of the weed, at the same time trying to avoid falling into the filthy water. Belar lost quite a bit of time due to weed on the fin and I had the pleasure of paddling 8km through the dead fish creek with a loose fin, until she finally found a screwdriver in a windmill right before the lunch post. Again the first paddlers arrived after about 5 hours, this time right in the center of Dokkum, welcomed by a huge crowd of spectators from riverside cafes.

Day5: The final day. And it’s not getting easier. Crazy headwind and upstream paddling.

On Paper, Day 5 looked easy. First of all a 10.00 AM instead of a 9.00AM start,  which after 4 days of getting up at 6:30 was very much appreciated. Then the distance was only 31km, supposedly easy. And the start was really scenic, right in the Dokkum city center by the windmill. But it turned out to not be an easy day at all, constant head- and sidewind, that felt even stronger than on day 1, either because everybody was really exhausted or because the paddle again was mostly along fields that gave little protection from the wind. To make things worse, most of the paddle was upstream and there were a few strange rips to deal with as farmers were pumping water from the fields into the canal due to the low sea level and heavy rain from the days before. But everybody was looking forward to finally finishing this crazy week and returning to the cars and belongings that had been in Leeuwarden since day 1. And of course that was the day of fighting for the final ranking, which turned out incredibly close. Bart de Zwart was the overall winner, only 7 (!) seconds ahead of Ryan James!

Congratulations to all who finished this demanding race and big thanks to Anne-Marie Reichman and the volunteers who made this incredible event and totally unique experience possible! See you next year!

Personally, I would like to thank the guy from the organization who kindly drove my van from stop to stop, Fanatic for providing me with the 14′ Flatwater Prototype Board, Moritz Martin for cutting and bringing a Kia Loa Paddle to Holland for me, ION for supplying me with the amazing roof straps which allowed safe driving with 4 Boards on the roof in strong wind without paranoid checking stops and the waterproof backpack that kept my lunch break stuff dry. Thanks also to my friends who supported and motivated (or made me angry enought) to pull through that event and to the fanatastic boat crew that motivated, helped and kept everybody on track, especially on the crazy lakes.

The closing word from Belar: “That is a race you only appreciate a few weeks later. Even if now you ask yourself “what the hell am I doing here?” in a few weeks you will know it was worth it”